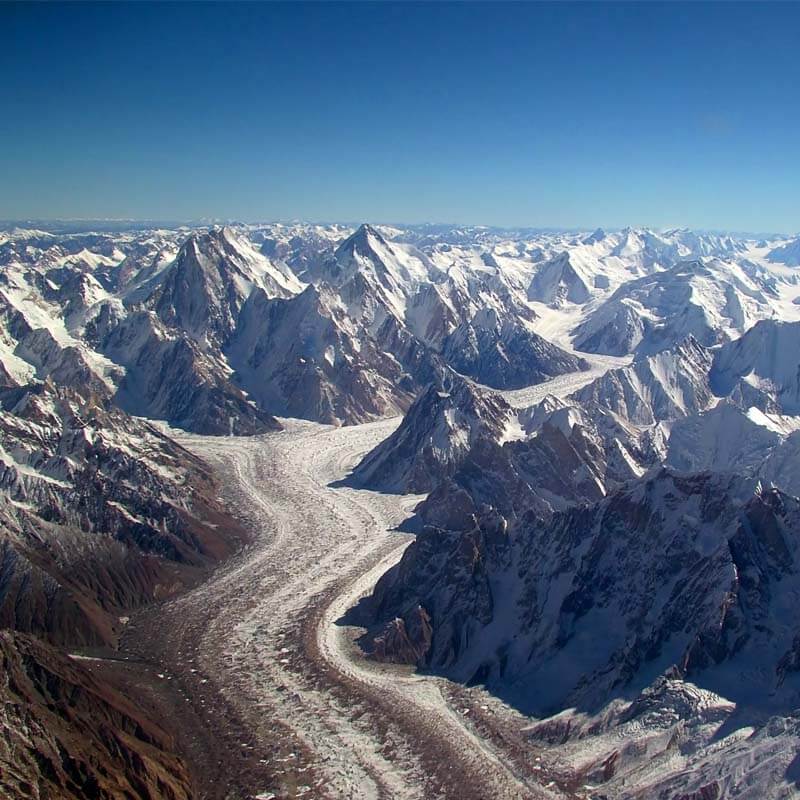 The mountains in Asia are the result of mountain building, which occurred during the Cenozoic Era Granites, gneisses, crystallized schists, and phyllites are the most important geological structures in the region. At the end of the Mesozoic Era, the region was characterized by great structural changes, resulting in widespread extinctions. The highest mountains on Earth are located in the Karakoram range. Intense geological upheavals formed in the last few million years. As a result, earthquakes are common and often trigger massive rock and ice avalanches. Although the region is still experiencing frequent seismic activity, the events are usually much less violent than before.

The range is from the east to the west. It is a beautiful place characterized by deep narrow valleys, sharp peaks, glaciers, and rivers. The Karakoram mountain range is one of the world’s tallest at approximately 6,000 m above sea level. It’s home to four of the fourteen peaks in the world that exceed 8,000 m above sea level. The most heavily glaciated part of the world is Pakistan’s Karakoram range of mountains. It covers 28-50% of the area with many glaciers, making it exceptional.

These are among the world’s most remote and highest altitude glaciers. They’re the largest and second-largest glaciers outside the polar regions. The Siachen and the Biafo Glaciers are world-famous for their beauty. However, the most famous glacier is the Siachen Glacier, the third-largest outside the polar regions, known for the highest altitude battles fought between India and China. There are seven passes within the Karakoram mountain range. Khunjerab is the most famous border one, the Karakoram Highway, a 1,300 km long road that links Pakistan and China. It is the most popular tourist attraction. Most tourists, who pay a visit to Hunza valley, must go to the Khunjerab pass (Pak-China border)

Karakoram is the coldest, driest and highest mountain in the world. The weather of the Karakoram is very extreme and very unpredictable. The southern slopes are exposed to the monsoon wind from the Indian Ocean, and the north is arid. The lower and middle slopes always have some rain, but they also get a good amount of snow. Rainfall is heavier at the upper and lower slopes than at the middle.  Above 4,900m, the precipitation is always in solid form. Temperatures above 5,700m generally hover around 0 degrees Celsius during the winter months Temperatures below 3,900m-5,700m remain higher than 10 degrees Celsius throughout the year. The Karakoram Mountain Range is located in the Himalayas, in north-central Pakistan. It is also characterized by high, rarefied air, intensive solar radiation, strong winds, and great diurnal temperature ranges.

In these lower valleys, most of the vegetation is human-made. The rocky and arid lower slopes only support discontinuous grazing areas. However, the valley bottoms are intensively cultivated with various crops and orchards. As a result, some of the valleys are geologically distinct from the higher mountain valleys. Extensive, undulating fields of pasture lie between the higher peaks.

The treeline in the Karakoram ranges is restricted by a cold line and by a string of aridity. It’s covered mainly through willow, poplar, and oleander thickets. The upper limit is delimited by cold, and the lower by aridity. Willow, poplar, and oleander thickets occur along with river courses up to 3,000m. The lower and middle slopes always have some rain, but they also get a good amount of snow. Rainfall is heavier at the upper and lower slopes than at the middle. Above 4,900m, the precipitation is always in solid form. Temperatures above 5,700m generally hover around 0 degrees Celsius during the winter months Temperatures below 3,900m-5,700m remain higher than 10 degrees Celsius throughout the year.

The Karakoram Mountain Range is located in the Himalayas, in north-central Pakistan. It is also characterized by high, rarefied air, intensive solar radiation, strong winds, and great diurnal temperature ranges Willow, poplar, and oleander thickets occur along with river courses up to 3,000m. Juniper is a coniferous evergreen tree that grows on slopes covered by snow. Shrubs of the genus Artemisia are herbaceous perennials that are native to arid regions in Karakoram Ranges.

However, the mountain wildlife in the Karakoram has suffered due to hunting. As a result of overhunting, the Marco Polo sheep has become a rare breed only found in the eastern Pamirs and migrates to the western mountains. Ladakh is a mountainous land inhabited by the high, flat mountains to the east, and Siberian Ibex and Markhors make their home in the rocky cliffs. Black bears, lynx, snow leopard, wild yak, and large raptors are endangered species. In addition, you can find mountain goats, golden eagles, and deer in the mountain range.

Mountain Regions in the Karakoram:

Following are some of the famous mountains in the Karakoram region. The list is arranged according to the west to east mountains.

Batura Muztagh is the westernmost subrange. It’s home to cherish much, the second-highest unclimbed peak in the world.

It is located in Giggat Baltistan.

The Narrow range Spantik Sosbun is located in the region of Gilgit Baltistan.

It is situated in the northern area of Pakistan.

The highest sub-range of the Karakoram and the home to K2 and three other eight-thousanders is the border between Pakistan and China.

It is located on the southwest side of the Siachen Glacier.

The Siachen Muztagh range is 60% controlled by China and 40 % owned by India.

Rimo Muztagh is one of the most remote sub ange in Karakoram ranges.

Saser Muztagh is the most eastern range in the Karakoram, located in Ladakh, India.

Famous Mountains in the Karakoram:

Mount K2, also known as the Chogori Peak, is the second-highest peak in the world. At 8,611 meters (28,251 ft) above sea level, it is just under two miles high, making it the second tallest mountain in the world after Everest. K2 is known as a dangerous mountain in the world, and it is located on the China-Pakistan border. It’s called “The Savage Mountain” because of its highly challenging climb. It is the toughest of all climbs, with more than 300 successful summits and 77 fatalities. The highest point in Pakistan was first summited in 1954. 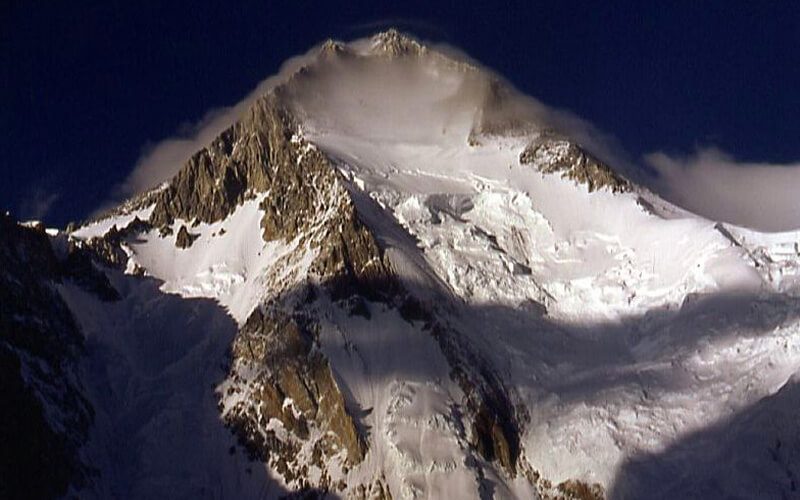 This mountain is known as the Hidden Peak and is surveyed as K5. It’s the 11th highest mountain in the world and forms part of the Gasherbrum Massif. The mountain has an elevation of 8,080m above sea level. It is located on the China-Pakistan border. Mountaineers first climbed it in 1958. 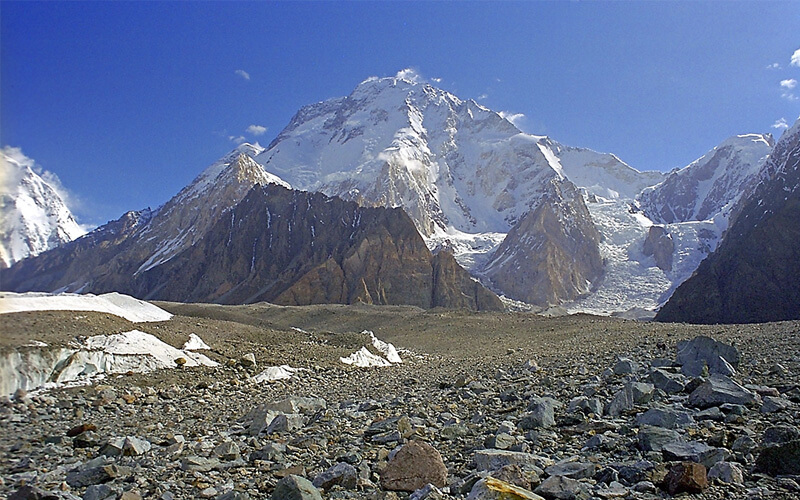 The broad peak is at 8,047m above sea level, making it the 12th highest mountain in the world. It’s about 8km away from K2 and has two summits – Broad Peak East and Broad Peak West. It was the first summit in 1957, but the first ascent in winter was done in 2013. 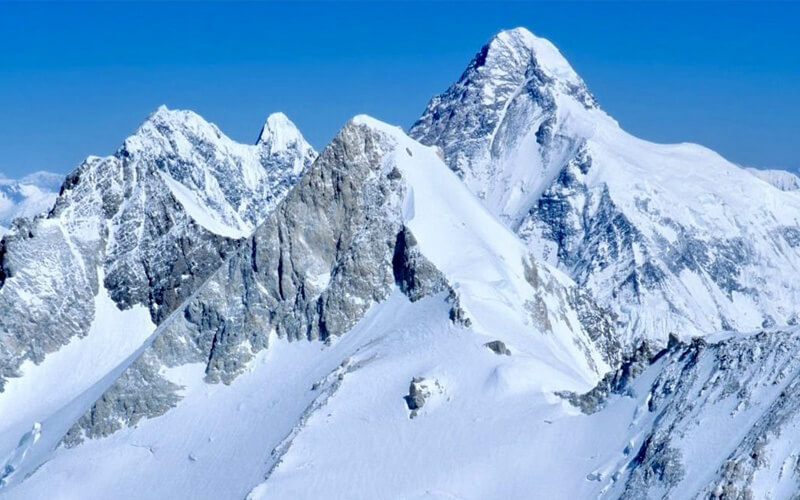 It is also known as K4, and it is the 13 highest mountain in the world. In addition, it is the third highest peak in the Gasherbrum Massif.  This mountain range is 8,035 meters above sea level. Gash-II is the shortest of all the 8000-meter peaks in the Karakoram range and was the first ascent in 1956. 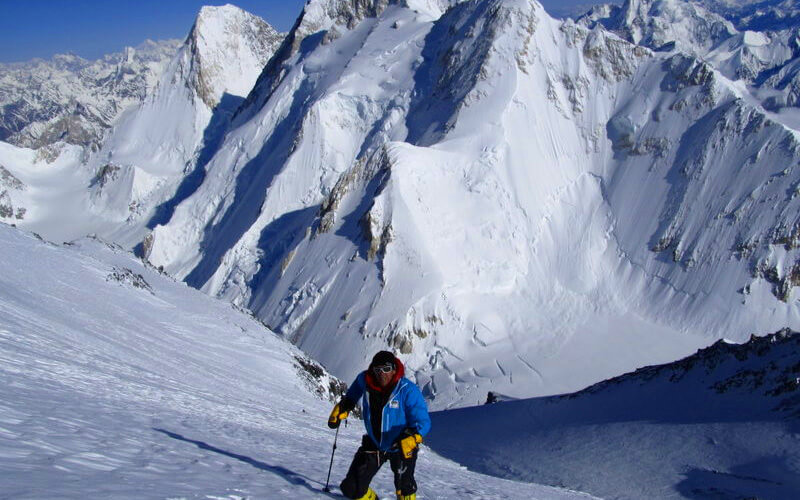 Gasherbrum III is at 7,952m above sea level and short of an eight-thousander. It’s a fantastic peak, but still an impressive one. The summit is known as the South Peak (or South Summit). It lies between Gasherbrum II and Gasherbrum IV. This mountain was one of the highest unclimbed peaks in the world until the first ascent in 1975.

Notable Hikes in the Karakoram:

Hiking the Karakorams is life-changing, but it requires proper preparation and gear. You need to be prepared for any situation and make sure you’re wearing appropriate equipment that will get you through the trip without too many issues. You’ll most likely be camping during your trek. You might be staying in a few hotels during the trek, but they’re only for the first few nights of the trek, and after that, you’ll be sleeping in tents.

The summer months fall between June-September. You’ll want to avoid the harsh weather and heavy snows of the winter months, making your trek more dangerous. There are many notable treks/hikes in the Karakorams. Here’s a brief list of some of the most popular. 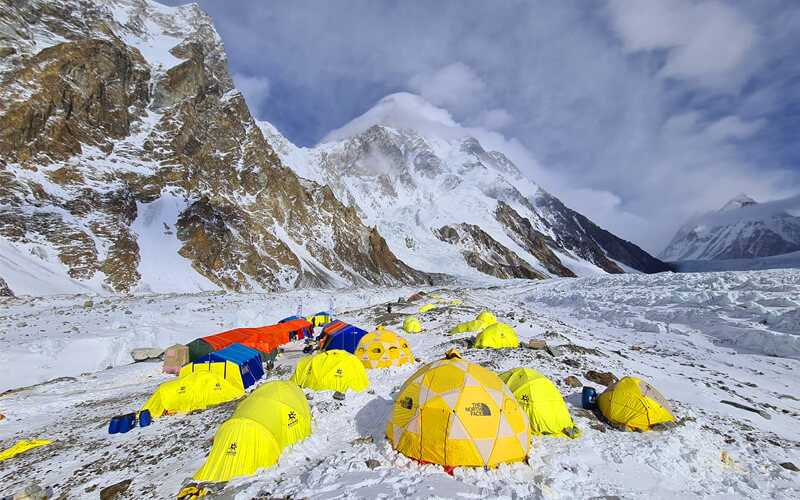 The trek to the K2 Base Camp is one of the most amazing treks in the world. It’s a fantastic place to see the beautiful scenery and witness some of the world’s highest peaks. A hike should take between 9-15 days, and you can expect to be hiking for around 5-7 hours a day. You’ll hike up the majestic Baltoro Glacier and take in the incredible views of the spectacular Karakoram range. You may not be the strongest or fittest climber in your group, but this can be a challenging yet rewarding adventure if you are prepared and physically fit. Take a spectacular trek with the K2 Base Camp Trek. You’ll experience one of the most spectacular treks in the world. 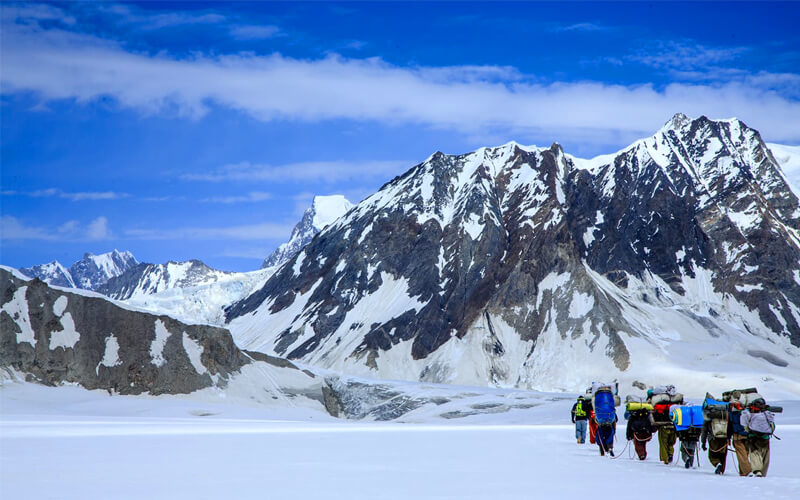 The lake is the highest point of the Biafo Glacier and the second-highest natural lake after Lake Victoria in the world. The trial is over 16km wide, the most extended glacial system within the Karakorams. Snow Lake is the meeting point of the glaciers and lies in an area of unknown peaks. It is an honor for you to trek in a genuinely remote and stunning area. Some consider it to be one of the most beautiful treks in the world, and you will trek past stark mountains, icy white glaciers, and gorgeous flower-filled meadows.

Although the trek is beautiful, it’s a strenuous experience, and if you’re not physically fit, it may not be possible to finish the trek. You will need a 15 days trek to complete the journey. You will stay at a combination of campgrounds and hostels. 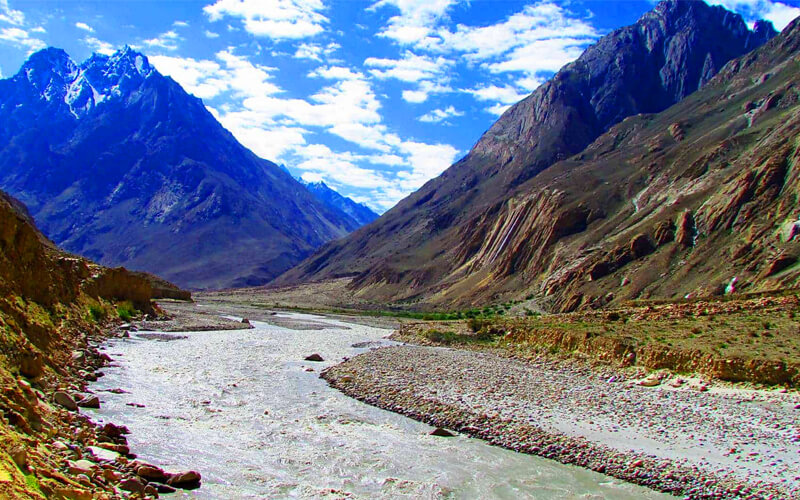 This easy trek is one of the most popular short treks in the Baltistan region. It is ideal for anyone interested in experiencing the life of highlanders in Baltistan and genuinely experiencing the Balti culture. The trek takes 11 days to complete the journey. The trek is around 11 days long and wanders through the Khaplu and Shiger Valleys. There are great views of fruit orchards and the lush green beauty of full alpine flowers in the summer. There are many landscapes, from the sands of the Indus Valley to the high snows of spectacular peaks. The trek takes you through them all. 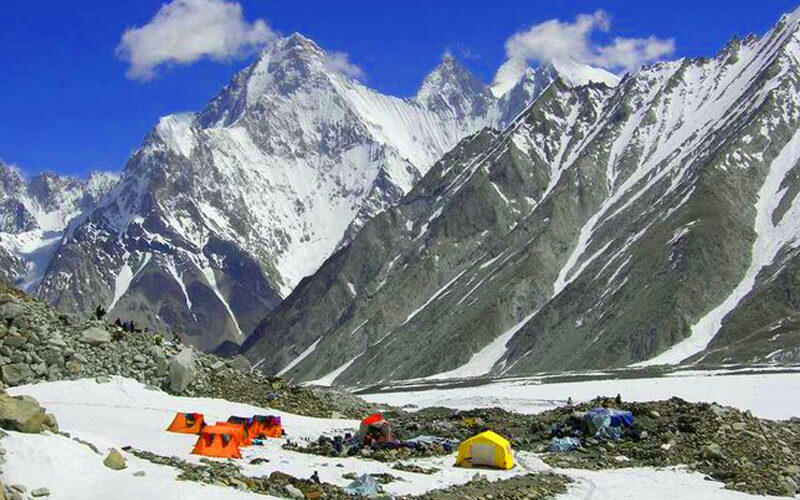 A trip to the Karakorum is a combination of two of the world’s most exciting and beautiful treks. You will trek through the largest of the Khumbu glaciers, the Gondogoro Glacier, and the more remote Snow Lake, and experience two of the world’s highest mountain passes, the Hispar La and the Gondogoro La. Your expedition can last up to 33 days with 26 nights camping and six nights spending time in a hotel. The trek is undoubtedly strenuous and is only recommended for people in excellent health.

May You Also Like: Karakoram Highway has the stunning beauty of the landscape

Abdullah Zahid is a staff member of Click Pakistan. He contributes to the Digital Media Marketing department.