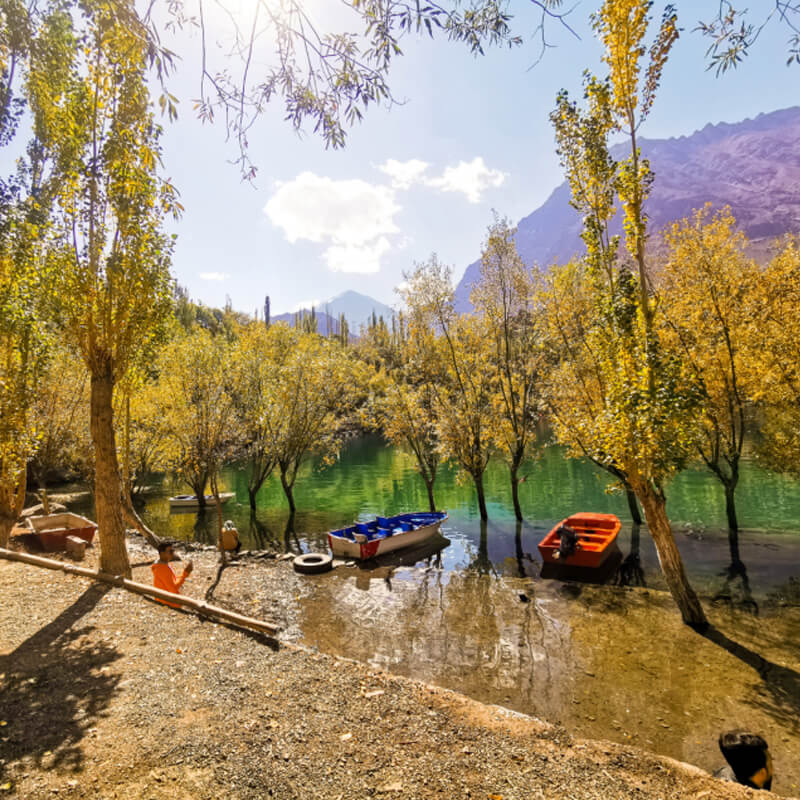 [vc_row][vc_column][vc_column_text]Skardu is a gem of beauty, peace, and nature in the extreme north of Pakistan. It would not wrong to say that Skardu is an example of nature’s perfection. The valley is home to several of the world’s highest mountains, including K2, K3, and Gasherbrum. All are linked by this valley, which contains routes to various high mountains.

Thousands of climbers worldwide visit these high peaks every year; some have even lost their lives while attempting to reach the top. After Jaglot on the Karakorum Highway, a secondary route leads to Skardu. The journey lasts less than seven hours after the construction of the new highway and is dotted with several streams, springs, and friendly locals. This region has become important after the China Pakistan Economic Corridor project and will prove a game-changer to boost economic activities.

CPEC is a $64 billion infrastructure project that will link China’s strategically important Xinxiang province to the port of Gawadar in Pakistan’s far-flung Balochistan. It will provide China with direct access to Africa and the Middle East while generating billions of dollars for Pakistan and stimulating economic activities along with the road network, replacing the legendary Silk Road.

One reaches Shangrilla resort shortly after passing the ancient wooden bridge that spans the River Indus, a beautiful world amidst the surreal mountains. The village Kachura lies at higher elevations, where pine trees surround the lake’s transparent water. The sunrise over the mountains is a beautiful sight.

As soon as the winter season gets started, this questing makes the round at our query center. Is Skardu open in winter? So the answer is YES. Although Skardu remains open the whole year. In the winter season, airflow becomes unpredictable due to rapid weather conditions changes.

Most of the time, the flight (Only PIA flights operational for Skardu) is either delayed or canceled due to bad weather conditions. However, traveling by road is still possible with no barrier. The winter season in Skardu begins at the end of September and lasts until the end of March. Between December and February, Baltistan is covered in snow. During these months, the area is surrounded by snowflakes.

In winter, the weather in Skardu and Baltistan is frequently overcast. It makes it virtually impossible for mountaineers to reach K2 during their trip. The temperature plummets below -25 degrees Celsius. In the winter, the average temperature is -10°C to -15°C. 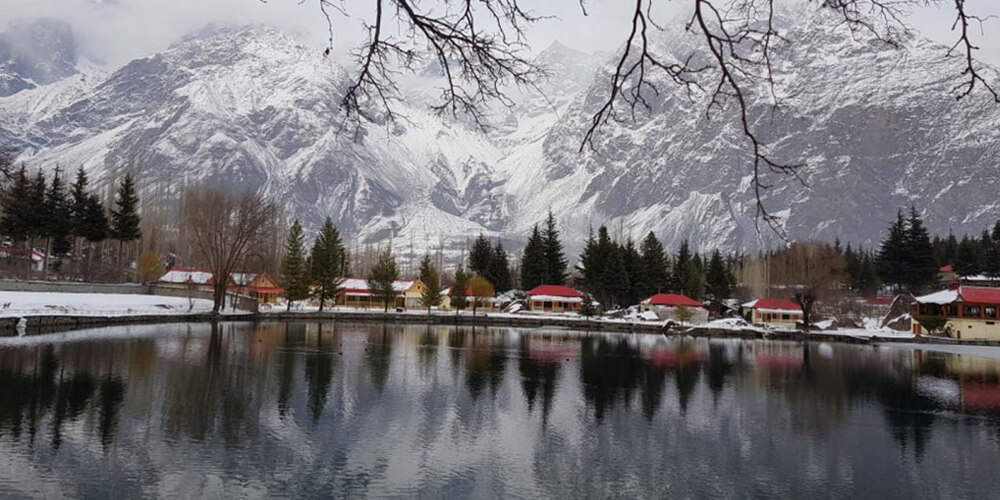 Summer is the peak season to visit Skardu and its surrounding places. In the summer season, the beauty of Skardu is enhanced by its pristine spring water, delectable fruits, the blue Indus River water, historical sites, lakes, and pleasant weather that draws tourists from all over the world.

Skardu city is the main urban area and headquarters of the Skardu district, a strategically important northern area of Pakistan that adjoins China, Afghanistan, and India. The region is a significant travel and trekking destination, and the valley serves as a gateway to four mountains towering over 8,000 meters high.

The valley is a popular destination for mountaineers throughout the year, with an active season from April through October. The area is also snowy and chilly in the winter. Summer in Skardu is lovely, with the lake Kachura, the Mantokha waterfall, the Sarfranga Cold Desert, Shigar Fort, and Buddha Rock. 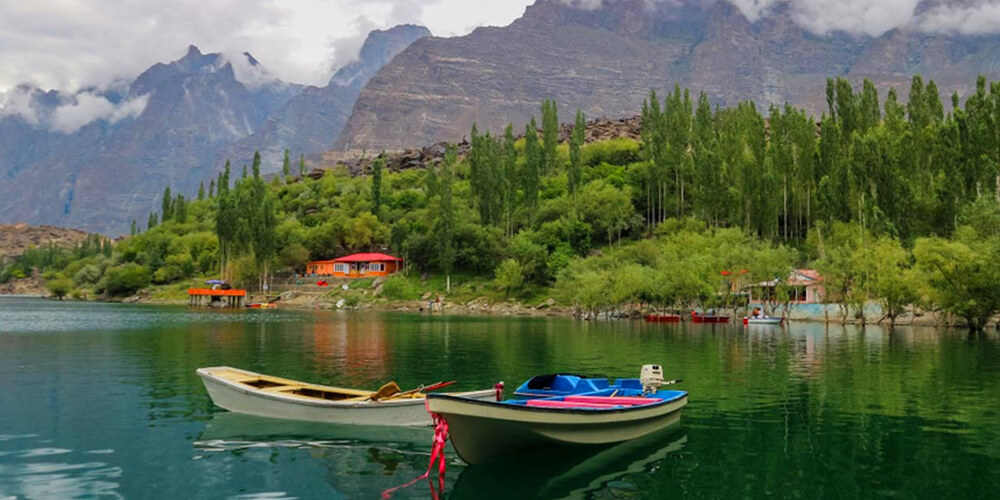 Skardu is best visited during the summer months of June, July, August, and September. It’s the ideal time to enjoy lush green scenery at a pleasant temperature without excessive rain and flee from the oppressive heat in Pakistan elsewhere. October is another excellent month to visit Skardu. During this season, make a trip to Skardu to view the area in golden fall hues. Winter transforms Skardu into a magnificent white fantasy realm, but getting access to the city will be more difficult.

When it comes to the best time to visit Skardu, there are three distinct seasons. April through October is considered the tourist season when the weather in Skardu is at its finest. Temperatures may vary from 26°C to 12°C, with rainfall ranging from three to four times per month.

Skardu, on the other hand, has a much lower average temperature than these others. However, the winter season in Skardu can dip below -10°C; December to February is when it happens most frequently. Therefore, flights are commonly canceled in Skardu during this period because it is not the best time to visit.

The Skardu Valley, in Gilgit-Baltistan, is home to many ancient monuments, including the Skardu and Shigar forts. Take a look at some of Skardu Valley’s historical sites.

Skardu Fort is also known as “Kharpocho,” which means “King of Forts.” On his orders, King Sher Ali Khan Anchan constructed this fort as a crucial defensive structure in the region during the 16th century. This fort was built on a mountaintop as a precaution against external dangers. It included monitoring the valley’s entrance and exit roads.

A large plaque on the fort’s wall, located on a high plateau in the Skardu Valley, advertises tourism in the region. In a panoramic view of Skardu Fort, one may see the entire valley. 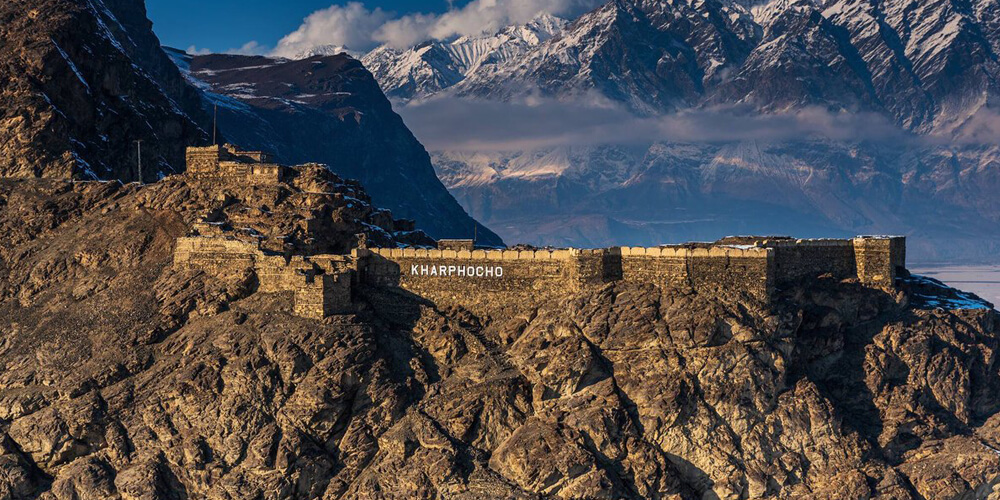 The Shigar Fort, also known as The Fort on Rock, is a historical fort in the Shigar district of Baltistan. It was constructed in the mid-17th century by the Raja of Amacha Dynasty of Shigar. Aga Khan Cultural Service Pakistan has restored the Fort. The Fort was converted into a museum and luxury hotel managed by Serena Hotels after rehabilitation, which began in 1999 and concluded in 2004. It cost roughly $1.4 million to restore it.

Skardu Lakes: A gem of beauty and peace

The Skardu Valley is home to some breathtaking lakes. Freshwater glimmers in the vicinity of Skardu, adding to the region’s beauty. These lakes in Skardu city, aside from the natural beauty of Skardu and its surroundings, will amaze you.

The following are the most stunning and frequented Lakes in Skardu.

How to reach Skardu

Skardu is accessible both the way by road and by air. By road, it will take about 13 hours (600 kilometers) if you are traveling from Islamabad, Pakistan’s capital city. But after frequent flights landing from all major Pakistan cities has made it easier to visit Skardu. Moreover, govt is taking steps to start international flights operation at Skardu airport.

Skardu Airport, which is Pakistan’s highest airport and one of the most stunning airports globally, is located on a mountainside surrounded by towering peaks that reach heights of more than 4,500 to 5,800 meters. It sits 2,230 meters above sea level. Skardu airport is notorious for tricky landings due to its terrain, which poses a problem for pilots every time they touch down.

The road from Lahore to Chillas via Babusar Top is entirely carpeted and suitable for all vehicles. However, some patches of damaged asphalt can be found between Chillas and the Raikot Bridge. In addition, the Gilgit Skardu Road is bumpy, narrow, and under construction. Nevertheless, almost eighty percent road has been completed. And work is going on very fastly.

Best Places to Visit in Skardu

Skardu and its surrounding region are full of fantastic tourist destinations.Below are some places to visit Skardu and its adjacent areas.

Things to do in Skardu

FAQs about Skardu are:

Where is Skardu valley located?

Skardu is located on the northern extremity of the country. Pakistan shares a border with China and India at Skardu.

What is the capital of Skardu?

Can you see K2 from Skardu?

Although the Karakoram peak’s highest point is at 19,671 feet (6,350 meters), it couldn’t be seen from Skardu. Only the Concordia or K2 viewpoint is accessible by a 2-hour trek from Hushe Valley Khaplu.

Is there snowfall in Skardu?

From the mid of December till the end of February, Skardu sees a great deal of snowfall.

Can we visit Skardu in December?

Skardu is open all year. However, due to the significant snow and low temperatures, most tourist activities and locations are closed in December.

Skardu is one of the unique places to visit in Pakistan because of its distinctive natural beauty and rich Balti heritage. In addition, the city has its airport, making the region more accessible than other areas of northern Pakistan. Spend a few days roaming around Skardu’s natural and cultural attractions, as well as sampling all of the delicious Balti cuisines you can find.[/vc_column_text][vc_empty_space][vc_text_separator title=”” color=”black” border_width=”2″][vc_column_text]

1 thought on “Skardu: a gem of beauty and peace”