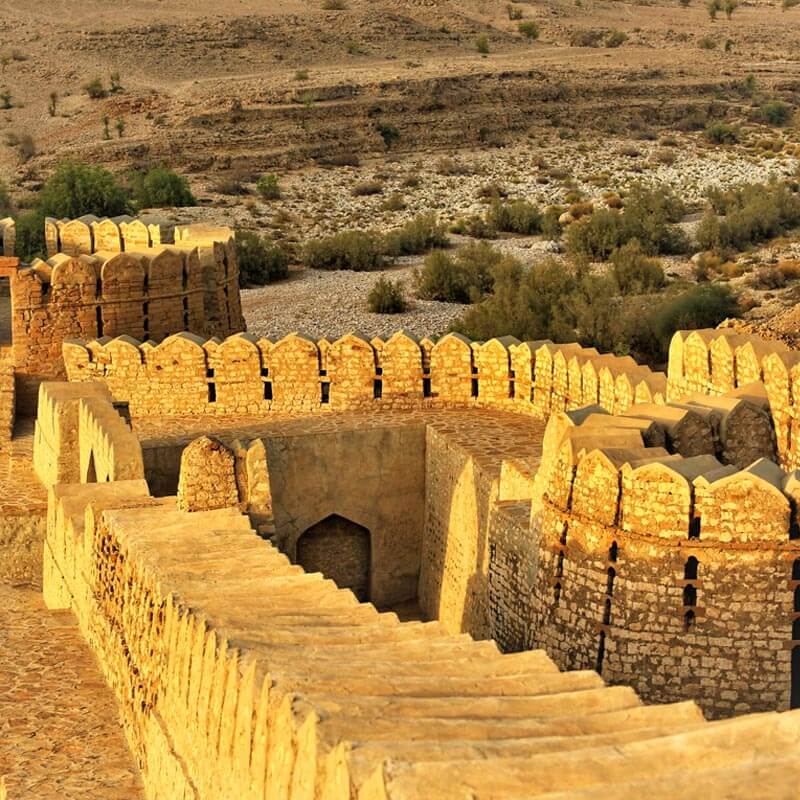 Considered to be the largest fort in the world, Ranikot Fort is also known as “The Great Wall of Sindh. It is often compared to the Great wall of China. The question arose in any tourist about its construction, and historians haven’t solved the puzzle of why such a large structure was built. The fort is magnificent architecture and is well-preserved. Initially, it was believed the fort was built during the regime of the Sassanians, the Scythians, the Parthians, or the Bactrian Greeks. But later on, the evidence revealed the fort originated during the rule of the Talpur Mirs.

According to the available record, the fort was built by aiming to protect the Sindh against British forces and as a place of refuge for the Mirs in case of failure to control the march of the British invasion. The irony here is, the British forces took over Sindh even before the fort’s completion. Historian Ishtiaq Ansari said that during the times of Kalhoras, the Talpurs sent their families to Thar and Kachchh. The Ranikot fort was built because they needed a place where the safety of their family gets assured in the future. The main water source for the whole area was a torrent called Rani Nai, which was named after the fort. The Pakistan National Commission nominated Ranikot fort for UNESCO in 1993, and it’s now on the tentative list of UNESCO World Heritage Sites. It’s also listed under the Antiquities Act, of 1975.

Things to do at Ranikot:

Ranikot fort has gained popularity among local and international tourists and archeology enthusiasts as a historical wonder. So here we will point out some things to do when you visit this historic landmark.

Who built the Rani fort?

Although there is no immense information about the fort’s history, historians say the Pakistani Talpur dynasty constructed Ranikot Fort.

Which is the world’s largest fort?

It’s believed that Ranikot Fort, Sindh, Pakistan, is the world’s largest fort, and it’s been compared to the Great Wall of China.

Why was Ranikot fort built?

The fort was built for protecting Sindh against the British. And as a place of refuge for the Mirs in case of failure to control the march of the British invasion.

What is the length of the Ranikot fort?

The gigantic fort of RaniKot is 35 km in length and connects barren hills.

You May Also Like: The History of Magnificent Badshahi Mosque

1 thought on “History of Ranikot Fort, The Great Wall of Sindh”